I originally drafted this in 2014/2015 to help frame a conversation around software engineers being on call. The primary audience was a group of software engineers coming from a predominantly desktop software background who believed they should not be on call. This memo was one component of a very long conversation. This version has been lightly edited to elide some contextual specifics.

Who is responsible for this?!

re·spon·si·ble: being the primary cause of something and so able to be blamed or credited for it.

What happens when an application running in production starts failing at 2am on Saturday? Do we wait until 8am Monday to fix it? Should someone be woken up to address the problem? Who should we wake up if the acute problem is that the application has started crushing the database server by fetching a set of data from a SQL database row by agonizing row via an ORM that encourages engineers to reason about iterating over a list of things backed by an abstracted-away SQL database in the same way they reason about lists of items in memory? Applications fail as a result of ineffective or surprising changes to application code at least as often as they fail because of underlying network/hardware/etc failures.

Figuring out who to blame or even the notion that anyone is "to blame" is not, it turns out, particularly useful. When an application is materially broken in production, the most useful action is to rapidly identify, assemble, and deploy the group of people who are best equipped to resolve the problem.

Broad access to production and the freedom to write and deploy applications without first seeking approval from Ops, however, has not automatically resulted in engineers expressing a commensurate sense of responsibility for the overall health and functioning of their running applications and/or for the entire production system.

re·spon·si·ble: having an obligation to do something, or having control over or care for someone, as part of one's job or role. 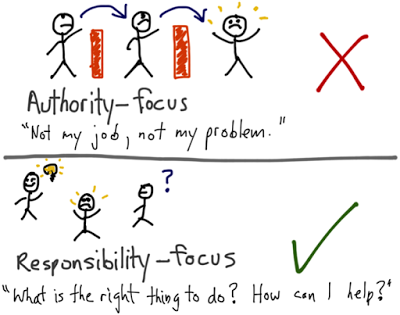 When we acknowledge that Ops and Development are corporately responsible for the health and functioning of production applications, our focus can shift to the question of how to better work together before, during, and after applications are deployed to production and delivered to customers.

What does operational responsibility look like, practically, for an engineer?

What if I get an alert, and it turns out to be a network/disk/hardware problem I can't personally solve? Can I just go back to bed?

If the other responders say, "We've got this, go back to bed", sure.

Otherwise, roll up your sleeves and figure out how to help. When things are broken in a material way, the goal isn't to return you, individually, back to your regularly scheduled activity (in this case, sleep). The goal is to get the organization's systems and services back to an acceptable state. Everyone gets back to normal the sooner this occurs; in the meantime, help.

Maybe the solution to the problem isn't to wait for the existing underlying subsystem to be fixed. Maybe instead you can work to get your application spun up on alternative gear. Maybe your application is up and running but another team is struggling and could use a hand—lend it. Volunteer to transcribe status updates via the appropriate communication channels.

Now, there will definitely be situations where there isn't anything you can help with. That's fine. When that happens, confirm that there isn't any other way for you to be helpful, let them know how to get ahold of you when/if your help is needed and go back to your regularly scheduled activities.

How your software runs in production matters most.